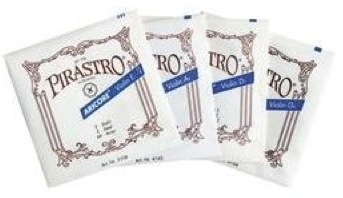 Pirastro Aricore Violin Strings are unique in a way that they feature a multifilament synthetic core (perlon). They are also considered to be the answer to the popular Thomastik Infeld Dominant Strings.

The Pirastro Aricore violin strings boast their high stability, and are not sensitive to humidity and temperature. They are easily tuned and stay in their pitch for a longer period of time. They are durable too.

If you find that some strings in the set of Pirastro Aricore violin strings are too dull for your liking, there are different makes of the strings for you to choose from.

There are the Chrome A and D Pirastro Aricore violin strings, which have a brighter timber. They are also ideal for musicians who are suffering from hand perspiration.

If you’re playing with gut core strings, the Pirastro Eudoxa Aricore Violin A String, though a synthetic core, is a perfect fit for your gut string set.

In an original set of Pirastro Aricore violin strings, you will have the following strings included:

Alternatively, you can buy the Chrome D and A strings individually to replace their Aluminium ones, if you are looking for brighter tones. The Pirastro Eudoxa Aricore A string comes separately from the full set.

Get all your Pirastro Aricore violin strings online as they are cheaper than what they will cost in local music shops. You may get additional discounts too!