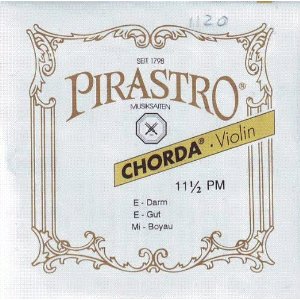 Pirastro Chorda violin strings are gut core strings, and are recommended for any violinist who wants an experience of historically authentic gut strings and performance.

Pirastro Chorda strings are also low tension strings, and will twist under the bow. The twisting will reduce response time effectively. The string will wind up at the beginning of the bow stroke, before it starts to vibrate. Thicker strings have greater propensity to twist. Players who use Pirastro Chorda violin strings on their violin will have to anticipate its response.

The high sensitivity of the Pirastro Chorda violin strings is what that keep beginner violinists away. They are sensitive to changes in temperature and humidity. Slight moisture and warmth in fingers and bow friction also alters the pitch of strings.

Pirastro Chorda violin strings come in a set, and is also preferred to play as a set too. When you purchase Pirastro Chorda strings, consider to buy the Pirastro String Oil to maintain its quality, as it’s a plain gut string.

Not recommended for beginner or intermediate violinists.